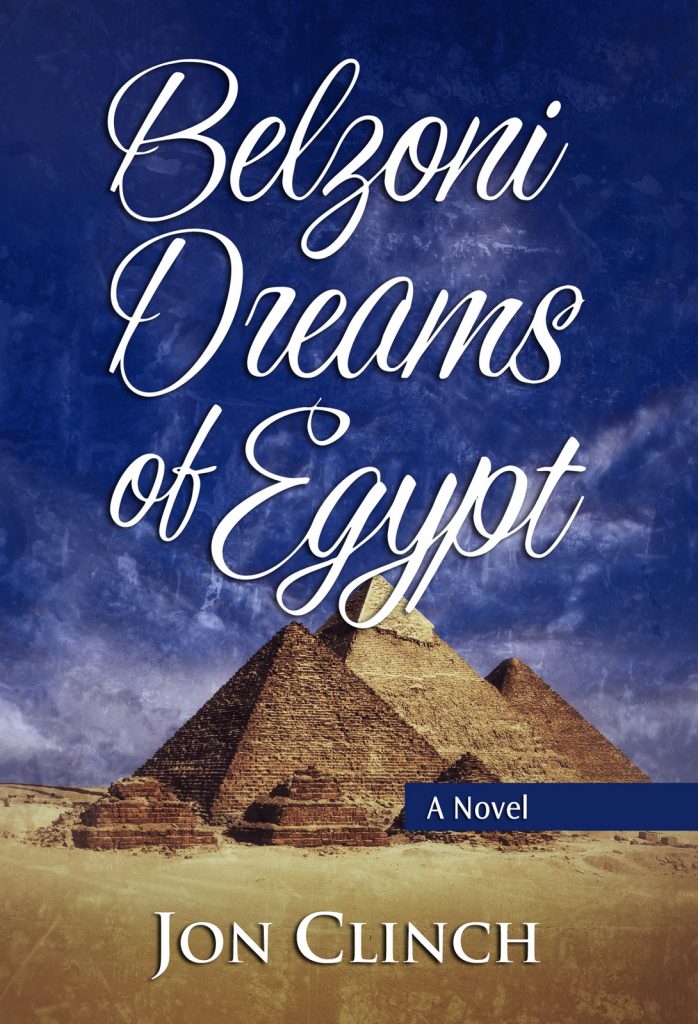 Part adventure, part romance, and part tall tale, Belzoni Dreams of Egypt is the “fictional autobiography” of Giovanni Battista Belzoni, a real-life 19th-century explorer, circus performer, and shameless self-promoter. He narrates the story at the end of his life, aboard a ship bound for the coast of Africa and his final, fatal adventure. Belzoni’s voice is bombastic and beautiful, and his narrative is both an unabashed love story and a ripping yarn.

The real-life Belzoni pillaged Egypt while Lord Elgin was pillaging Greece—only a whole lot more colorfully. Born in Padua, raised in Rome, and educated by the Capuchins, he stood nearly seven feet tall and easily found work in England as a circus strongman. His strength and agility, along with his expertise in hydraulics and pyrotechnics, brought him to the attention of of Mohammed ‘Ali, the Pasha of Egypt, and from there it was short work to begin ransacking the Valley of the Kings.

Belzoni Dreams of Egypt brings Belzoni back to vivid life, yarning about his exploits in a series of cliff-hangers involving pyramids and catacombs, poison gas and carnival freaks, heartless popes and Napoleon’s army. To say nothing of his loyal companion, the Irish orphan James Curtin, and his one true love, the faithful Sarah Banne Belzoni.

Praise for Belzoni Dreams of Egypt:

“Jon Clinch is without doubt one of the most talented writers of his generation, and Belzoni Dreams of Egypt is as close to perfect as a book can get. Clinch’s stunning use of language is as flawless as ever, beautifully paired with a story that is poignant, inspiring, and undeniably exciting. This is a magical, sweeping novel, one that you’ll devour greedily and then wish for more. Read it, read it, read it!”
— Tasha Alexander, New York Times bestselling author of Behind The Shattered Glass

“Jon Clinch has written some really memorable books, but to my mind Belzoni Dreams of Egypt is far and away the most extraordinary of them all. Gorgeous language, exotic settings, and a bigger-than-life hero to fall in love with—it’s sure to be a hit with passionate readers and book clubs everywhere. It certainly enchanted me!”
— Elizabeth Letts, New York Times bestselling author of The Eighty-Dollar Champion